Chris and I have made it home from Atlanta safely.  The ride home was a lot longer than the ride there, even though it took the same amount of time.

I am so glad to be at home on my own couch, with homemade food, and around my girls again.  I missed both of them very much.  Of course, 10 minutes after arriving and already getting 9 minutes worth of attitude from my 12 year-old made me realize that I could've probably gone a few more days without that.  :o)  My 4 year-old, however, I couldn't have waited any longer to spend time with.

I have spent time with them both, as much as I feel up to, since we got home.  I took some time to read with D (my youngest) last night.  I have started teaching her how to read.  She is so smart.  I know, I'm biased.  However, I don't remember K (my oldest) being able to do what D can do at her age.  I am so grateful for the preschool that she is in for teaching her so much.


To update you on the rest of my Atlanta trip...  On Wednesday I had my muscle biopsy.  Before I went down there, I was under the impression that it would be under general anesthesia.  Then, Dr. Shoffner told me it would just be under local.  THEN, when I got to the outpatient surgery center, they told me they were going to put me out for it.  Geez, make up your mind people.  ;-)  So, I got a little "Jackson juice", as my former coworkers and I used to call it.  That's Propofol, the drug that Michael Jackson overdosed on.

I didn't realize how much the biopsy was going to affect me.  They took a small piece of muscle and skin from my left thigh (quadricep).  It has been more painful that I expected.  The surgeon must have severed a nerve as well because the lateral portion of my leg is still numb, three days after the surgery.  I'm hoping that goes away because it's really annoying when I go to scratch my leg and I can't even feel it.  The pain is definitely getting better, as would be expected, as is the weakness.  The day of my surgery and the day after, I could barely walk due to weakness in both legs.

I was tired of sitting in the hotel so Chris and I went to the Georgia aquarium in the afternoon after my surgery.  I walked all around and got so much exercise.  Okay, just kidding.  Chris got a wheelchair from the aquarium to push me around in.  He picked me up at the car with it and dropped me back off at the car when we were done.  The only time I was out of the wheelchair is when I had to go to the bathroom.  I know I still probably shouldn't have done it, but sometimes taking care of your mental health (happiness) is just as important in the healing process as taking care of your physical health. 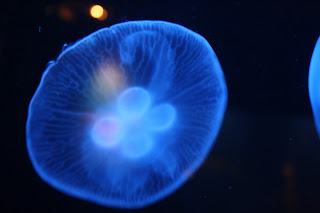 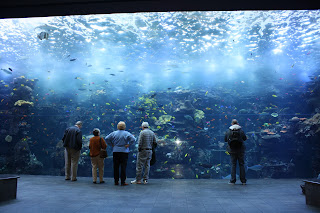 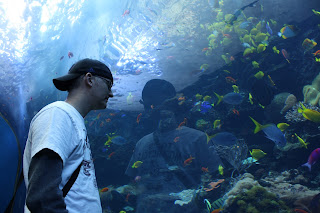 It definitely made me happy to go to the aquarium.  It was the coolest thing.  I shared a few pictures so you could see how beautiful some of it was.  I highly recommend it to everyone, if you're ever in or around Atlanta.  However, when we got back to the hotel, Chris had to almost carry me into the hotel room.  I think I was both exhausted and hungry; a bad combo for me.

So now I wait.  This is going to be a long 6-8 weeks.  It doesn't make it any easier that the trip and surgery really did me in.  I was in bed almost all day yesterday, the day after we got home.  Today I have been resting on the couch all day.  My legs are weaker than they were yesterday, which is weird because they should be stronger after resting them all day.  My heart rate is irregular again.  It has done this before, when I had a UTI.  I think it's just PVCs, but I can feel each and every one.  And when it happens a lot (every 6 or 8 beats), it starts to make me feel crappy as well.

So, I rest.  And write on my blog.  I do know that after hearing what the doctor in Atlanta had to say, and knowing that I will have results sooner than later, my spirits are definitely lifted.

"There's nothing half so pleasant as coming home again."  - Margaret Elizabeth Sangster

Sorry the biopsy was so unpleasant but very glad you got out and enjoyed the aquarium. Sometimes that little mental health boost makes the post fun body crap worth it. Give yourself more time to heal than you think. It took me a good 3 weeks for the incision site on my angio to feel relatively normal and I still find it aches. I was told it'd be fine after a day or 2 but we tend to heal so much slower than others.

PS they call it "jungle juice" over hear propofol and medazzelam (spelling portion of my brain is missing today). Unfortunately it didn't work during my angio.