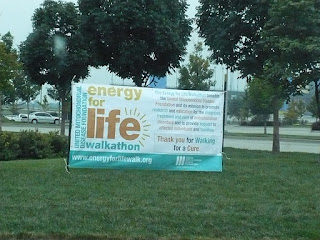 I want to extend my full gratitude to EVERYONE who helped with the Energy for Life Walk.  I am so thankful for those of you who found a way to support me, Team CTS, and the UMDF.  Even if you were only able to give a few dollars, every little bit helps.  Your "few" dollars may not seem like much, but if 100 people gave $10 each, that would be $1000!  That's a lot of money.

The walk turned out great!  Here are the totals...

We had a total of 33 walkers; 44 if you include the kids.  What a great turnout!

We came in second place for total amount raised per team.  (Even though I think I'm the only one who was keeping track.)  The top team, Joseph Atchley's Team, raised $5858.  That team's leader is Deidra Atchley, one of two co-chairs and she has been organizing some sort of walk or run for mito for the last 8 years.  I think that raising almost as much as the person who was organizing the event is pretty darn good, if I say so myself.

The top two fundraisers, and the winners of the two prizes, were JoEllen Shelby, otherwise known as mom, and Janel Abrams.  They raised $525 and $435 respectively!  Way to go ladies.  They each received a beautiful (I'm a little biased though, since I made them) Mitochondrial Disease awareness bracelet.  Here's a picture of each of the bracelets... 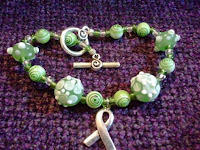 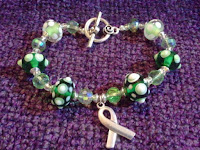 I also want to give shout outs to a few honorable mentions who also did a wonderful job with fundraising.  Both JoEllen and Janel, and the people mentioned below all worked very hard at recruiting friends and family to walk with us and/or asking for donations/pledges.  I am so proud of everyone, but I want to give a special thank you to a few people...
Judy Jones - raised $370
Naomi Wolfson - raised $375
Claudia Noakes - raised $200
And all of the following people who donated or raised at least $100 - Barb Blake, Heidi Davis, Nathan & Krystal Dunahee, Jenn Forkenbrock, Chris Jones (he better!), Higher M-Pact, and Jane McGinnis

Higher M-Pact is an organization here in Kansas City that helps under privileged youth.   Renee and Tyrone Flowers started and run the organization.  Renee, and 3 teens from their program, donated not only money and time to walk, but also helped out by volunteering to help run the walk.  The 3 teens helped with some of the kids games they had going on at the walk.  How awesome is that!?!

Last, but certainly not least, I want to thank Pat and Jane Shelley, my dad and step-mom, for hosting a great after walk party.  It was so much fun.  A good portion of the team were not able to make it to the party, but it was so much fun none-the-less.  We had very yummy bbq, thanks to Dusty, the co-owner of my dad's company.  It was a great way to follow the walk and celebrate a successful walk.  What a great idea that was, guys, and it went off without a hitch!  You have done so much for me, and my family over the past couple of years.  I am SO very grateful for everything you have done.  Thank you!

The team Miranda's Right Hands came to the after walk party as well.  I had a very good friend from Kindergarten through adulthood, until we basically just drifted apart.  Her niece, Miranda, has mito, as well as all of the other females in her family; herself, her two sisters, and her mom.  What a small world, huh?  I was so shocked when I found out that info shortly after I was diagnosed.  Anyway, Jeneane, the friend I've had since I was 5, her two sisters, and their families all came to the party.  Holly, another girl I was friends with in elementary school, came as well.  It was so great to catch up with everybody.  To help you to know who's who in the pic below, I'll explain a little better.  Jeneane and I have been close friends since we were 5.  Lynette and Michelle are Jeneane's sisters.  I was also friends with Holly when I was little and she's still friends with Lynette and, I believe, Jeneane.  Lynette, Michelle, and Michelle's daughter, Miranda, all have confirmed mito.  Jeneane and their mom probably have it but have not been tested.

I am also planning on volunteering more next year.  So, the bad news is, plan on me being even more annoying next year.  :o)

P.S.  There are lots more pics from the walk at Energy for Life Walk Kansas City Facebook Page
Posted by Robin at 2:45 PM