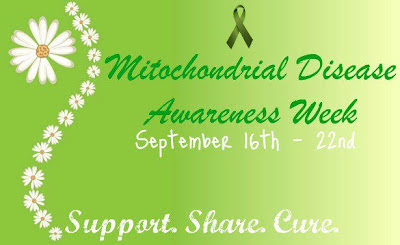 Last week was Mitochondrial Disease Awareness Week.  I tried to share mito facts here and on facebook.  I wasn't as successful as I was last year because I had other stuff going on that I wanted to share and/or get off my chest.  So, I'm continuing it past the official awareness week so I can still inform people about Mitochondrial Disease.

At the end of the week last week I asked everyone on facebook what they wanted to know about Mitochondrial Disease.  I actually got the idea from another mito facebook friend who did the same thing.  I thought, "what an excellent idea!"  Instead of me telling you all random things about mito that you may or may not already know, I'll ask everyone what they want to know.  Two facebook friends answered the call and asked me questions.  Instead of answering the questions in the limited space I have on facebook, I decided to answer them here.  Unfortunately, Mitochondrial Disease took a hold of me yet again the last 4 days.  Therefore, I'm just now getting around to answering their questions.  Better late than never!

The first question was "How does this disease impact your daily life the most?"  Good question, Shaylene.  This disease affects me a lot more drastically than what people might imagine if they have only met me once and/or see me out and about.  That is why it is called an "invisible disease".  You may not know it by the looks of me, but I spend 90% of my life in a laying or reclining position (i.e. in bed, couch, recliner, etc.).  Due to the malfunctioning of my autonomic nervous system, I am unable to tolerate being upright for long periods of time.  I have a VERY difficult time with standing.  I am unable to stand for more than a few minutes at a time.  Sitting upright with my feet below me causes a lot of problems as well.

Because of this, I had to quit working as an emergency room nurse in December 2009 and haven't been back since.  I am also affected by exercise/activity intolerance.  Walking up a flight of stairs is difficult for me.  I have to rest for a couple of minutes after doing so.  Going to a store to buy something or going to a doctor's appointment really wears me out.  If I'm not careful about the amount of activity, it will cause me to go into a "mito crash".  I explain mito crashes here - Crashes and supply and demand.

So, prior to getting sick, I was a very active person.  I worked an average of 4 twelve hour shifts as an ER nurse.  I ran 5Ks, 10Ks, and 2 half marathons while also lifting weights 3 days a week, all to stay healthy.  I was the type of person who never sat down.  On my days off I enjoyed spending time with my kids and getting housework done.  Yes, amazingly enough, I actually enjoyed doing housework. That's what happens when you're a clean freak with a Type A personality.  Now, I am barely able to fix myself lunch some days because I'm too worn out to do so.  I have had to teach myself how to stay content while sitting in one place for hours at a time while also trying to find things that I enjoy doing that can be done from a sitting or laying position. 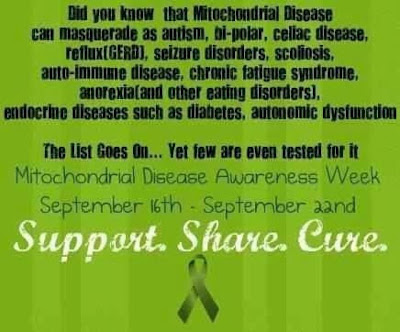 The next question is "Can you explain, in lay terms, the Complex I and Complex III?"

There is an explanation, in not-so-layman's terms, of Mitochondrial Disease: Complex I Deficiency here and Complex III Deficiency here.  However, you wanted it in lay terms... and I don't blame you.  You have to have a phD in science to understand the breakdown of my disease at times.

I am able to explain this on a whim.  However, since I had time, I wanted to look at a couple of references to figure out exactly how I was going to phrase it.  The biggest thing I wanted to do was to find a good, non-scientific, diagram that shows the 5 complexes.  When I was looking for a good diagram that could be understood by someone who's not a scientific researcher by trade, I came across a video.  The exact video, in fact, that is already on my blog in the "What is Mitochondrial Disease?" section at the top of the page.  I haven't watched it in awhile so I took a few minutes to watch it to see why it kept popping up when I was searching for an explanation of the electron transport chain.  It turns out, that the video does a MUCH better job of explaining the complexes and the electron transport chain than I could ever do.  Especially since it explains it while showing the viewer animations and diagrams of the process.  So, I am going to do an explanation in layman's terms and then ask you to watch the video.  (I originally typed "quick explanation" and have now come back to delete the "quick" because I, of course, didn't do a "quick" explanation.  I know, I know... you're shocked that I got a little wordy.) 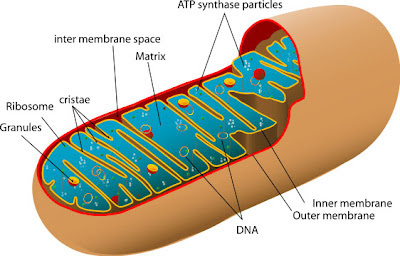 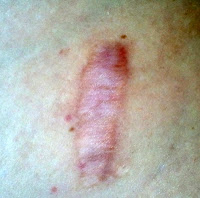 (Side note - I was diagnosed via muscle biopsy.  A surgeon cuts into my thigh (giving me this beautiful scar) and cuts out of piece of my quadricep muscle.  The mitochondrial disease specialist and researcher then looks at a piece of that muscle under a high powered microscope while inducing the process of oxphos.  He is then able to see that the entire process is not working and, somehow, able to determine that it is complex I and III that are malfunctioning.  Isn't science amazing?!?!)
Imagine an assembly line in a factory.  There are 5 people at 5 different stations in the assembly line. Let's say they're building a lamp.  If two of the people from the assembly line are missing (they called in sick, damn them!), the lamp will not be completed. (In my case, complex I and III "called in sick".)  In the case of our lamp, the cord and the lightbulb will not be installed in the lamp.  Therefore, the product that reaches the end of the assembly line, the lamp, which is not a completed product, cannot be shipped out to the customer.  The customer will not have what they ordered and, therefore, cannot use it.  So the customer now has no light to be able to see and, therefore, cannot do his/her job.

The "customer" is the cell.  If that cell is in a muscle, the muscle will not work properly.  It will get tired and weak very quickly due to a lack of energy.  When muscles are overworked, they produce lactic acid.  A build up of lactic acid causes pain.  Many of you experience that when you have lifted weights at the gym and are then in pain a day or two later.  That is because the muscles were being worked beyond the limit of energy being produced by the mitochondria.  That happens to my muscles everyday.  Just holding my arms up to brush my hair works my muscles beyond the limit of energy that's available.

Mitochondria exist in different amounts in different areas of the body.  While there are no mitochondria in red blood cells, there are hundreds, if not thousands, in each muscle cell and the cells within the brain and neurological system.  This is because the two organ systems that require the most energy are the muscles and neurological system.  That is why, despite the major differences between each and every person with mito, almost all people with mito have neuro and muscle symptoms.

So I went a little further than just explaining the complexes.  I thought I would use the opportunity to continue the explanation further into why two of my symptoms occur - muscle pain and weakness.

If you still don't understand it, or you want a better explanation, watch this video...


-"I seem to myself, as in a dream, an accidental guest in this dreadful body." - Anna Akhmatova

Well that is FASCINATING for sure! Wish it wasn't something you had to even know about. :( Thanks for taking the time (and energy) to write as much and put together such a great blog post with all the links. The video does make a lot of sense, and of course, raises more questions. Like, do the new cells your body produce start out with functioning Mitochondria, but then they become dysfunctional over time?

Thank you again for the scoop...I always like to be aware. LOVE YOU!! Lora

Don't you think that hormonal factors are part of it? Do you think that laboratory normal level results are the right ones. Thanks for sharing your experiences with one of this new field of diseases that is surprising people in our present era, and thanks for the great advances in human genetic engineering.