Being chronically ill is very difficult.  That's what this blog is all about, living with Mitochondrial Disease, a chronic illness, and how difficult it is.  As you can tell by the many things I talk about on my blog, there is a long list of things that make chronic illness hard.  There's the physical aspect; which is the largest part of it, obviously.  Then there's the mental/emotional aspect of it.  There's plenty of that as well.  You all are well aware of that aspect of chronic illness since that's what you hear a lot about.

There's a stigma about discussing finances with others.  It's interesting, too, that I'm okay discussing my poop on my blog for all of the world to read/see, but I'm embarrassed about discussing our financial issues.  Despite the stigma and embarrassment, I've decided to write about the financial issues that surround chronic illness... for two reasons.  One, I had a bit of a realization of our financial situation in regards to my illness last week.  (Which I will discuss below.)  Two, I have had many people tell me that my blog helps them by letting them know that they're not alone.  If anyone who reads my blog is dealing with Mitochondrial Disease, or any other chronic and/or progressive illness, they will understand the financial issues surrounding it.

As I stated above, I had a bit of a realization about a week ago.  Prior to becoming ill I was working full time as a nurse.  I had great health insurance, short term and long term disability, 401K, etc. etc.  All of our medical bills came from infrequent doctors visits, mostly by my daughters (kids are always getting sick), the occasional worry of a broken bone as kids always like to scare their parents with, and, visits with a doctor and/or tests to fix running injuries.

Don't get me wrong, we still had medical bills to deal with.  We still had to make arrangements for payment plans because we weren't able to pay the bills in full.  Can anyone?  However, due to the infrequency of the visits and the low $500 deductible because of my good health insurance, we were able to pay off those bills by the end of the year.  When the new year came around, and therefore, a new deductible, we had either paid off the previous year's bills or were pretty close to it.  I never felt like we were drowning in medical bills. 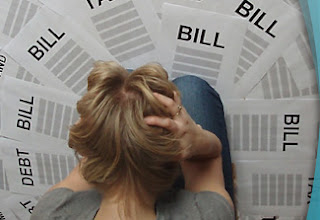 Here's where my realization comes in.  This is never going away.  Shocker!  I know.  Why am I just now coming to this realization when I've been dealing with this for almost 3 years?  I don't know.  I think it's because up until recently (about 6 months ago) I was still somewhat in denial that this is going to be my life... forever.  I was always thinking (consciously or subconsciously) that this would all go away.  I didn't think about the lifetime effect my medical problems would have on us until recently because at that time we had just fulfilled our deductible and had a long time to go before we had to start over again.

So, with the new year right around the corner and medical bill collectors calling 8-10 times a day, it finally hit me.  We are never going to be able to pay off our medical bills.  We are never going to be able to have a day without collectors calling.  As of right now, we are only able to pay $10 a month to each of the 15 companies that we owe money for medical bills.  It is just enough to keep the large majority of them from sending my account to the collectors.  However, not all companies will accept just $10 a month, and that's all we can afford (actually, we can't afford that even, but we are attempting to make it work).  That is why we are still receiving phone calls from bill collectors.  If we don't pay the $25, $50, or $325 a month that they require, they send our account to collections. 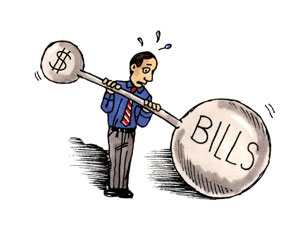 The problem is that we are barely making a dent in what we owe for all of my medical bills and in less than 3 months they will start piling up in large amounts again.  Right now when I see the doctor or have a test done it only adds a small amount to what we already owe.  But when we start over with our $2000 deductible, every time I need to see a doctor or have a test done we will owe 100% of what it costs.   It only takes a couple of months for that $2K deductible to be fulfilled.  So that $2K will be added to what we still owe from 2012.  And with only paying a small amount each month, we will, again, be far from paying it off by the time 2014 rolls around and our deductible starts over again for that year.  I'm sure you can see the visious cycle.  This is what hit me.  Our medical bills are just going to add up and add up through the years.  And, unless we win the lottery, they will never go away.  With my "Type A" personality, I absolutely cringe knowing that we will never be able to pay them off.

The other financial problem with chronic illness is that I can't work.  I do get social security disability, but that's less than half of what I was making as a nurse.  That's not even the part that bugs me the most.  That is the fact that I can never get a raise or find another job that pays better or work extra hours because we're going through a tough patch.  I have ZERO control over how much money I make.  I worked my ass off getting my bachelors degree as a single mother and this is what I get out of it... a lifetime of dismal pay.  (Speaking of college - I'm still working to get my student loans discharged due to my disability.  I haven't had to pay them during the application process so that helps.)

In addition to all of this, my disability just had to hit during a major recession.  So we're not the only ones suffering.  Which means that it's difficult to get help.  We have done everything we can to lower our bills.... while still keeping my sanity.  I say that because we could always cancel cable, movie rentals, and internet to save money.  However, if we did that, we would be paying a lot more money on psychiatrist bills because I would go crazy... seriously.  We have put in a ton of time trying to find a solution to lower our mortgage (and so has my sister, who is in real estate).  It's just our luck.  We do not have a loan that was sold to fannie mae or freddie mac so we don't qualify for any of the government assisted mortgage relief.  Our house would appraise too low to refinance.  Which is also why we can't sell it and move.  We would wind up paying on our mortgage and another one if we move since we wouldn't be able to sell our house for what we owe on it. 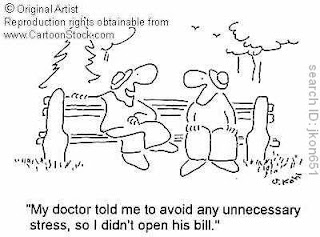 The stress that money puts on me doesn't help my health either.

I do want to make one note... if it wasn't for my dad and step-mom, we would be living in a van down by the river.

(If you're a Chris Farley fan, I've included the full video below.  I just wanted to throw this one in right here so people would know where my "van down by the river" reference came from.)
We are SO thankful to have their help.  Because of the generosity of family, friends, and even some strangers, we have been able to keep thing as normal as possible for our girls.  That is very important to my husband and I.

So, Mitochondrial disease doesn't just drain energy, it drains our wallets too.  We are out of solutions and out of money.  We don't know what to do anymore.  How are we going to do this for the rest of our lives?