So my plan was to cover a separate aspect of financial issues while ill, but I really need to discuss some things pertaining to what I covered in "Part I" first.  Then I'll discuss the new stuff.

Our financial situation, as you can imagine, has been horrible since I had to quit working in December 2009. I had enough paid time off to get us through until February 2010.  Since then we've struggled.  Since my husband was unemployed at the time I got sick (whoa... double whammy!), we had zero income for awhile.  That is when my parents kept us from living in a van down by the river.  (Are you picturing Chris Farley and laughing or smiling?  I am.)  Unfortunately, we will never be able to pay them back for everything they've done for us.

As time went on, my hubby (yes, I just said hubby) found a job.  After working at that job for awhile, he got a promotion.  We were both ecstatic.  He was working hourly and having to work over 50 hours a week in order to keep up with our bills.  With his promotion he would be getting salary and it was equal to his 50 hours a week (with the overtime).  Great!  That meant that he would be available for his family more often because he wouldn't have to work overtime, and because he would be able to take me to a doctor's appt if necessary and not get penalized on his paycheck for it.

We thought, based on the budget I had put together, that we would almost break even each month with the amount of salary he is getting.  However, I didn't include some things in the budget, I underestimated the cost of my prescriptions and medical bills by a LOT, and I didn't include extras - clothes/shoes, bday presents, school supplies, car repair, occasionally eating out (which is necessary sometimes.. like when both parents are sick, I'm in the hospital, or I'm really sick and it's soccer practice night, etc.)  Therefore, all of that added up to over $700 a month.  That is the amount we over in debts vs income.  A couple of months of that can be taken care of by using credit cards for gas and groceries.  Then it's taken care of for a couple of months by not paying medical bills and/or a credit card bill.  And then we have where we are now.... screwed!

We receive at least 10-15 phone calls a day from companies we owe money to.  We are behind on our mortgage - to the point of receiving letters threatening the dreaded "f" word.  I can't schedule another appointment with my pain doctor until we pay the entire amount due to them.  You get the idea.  So, when we say we can't afford something that only costs $5-$10, now you know why.

Even though I know you're all so intrigued with my financial issues (oh the things I do for the sake of helping others)...  Let's move on to the next aspect of chronic financial illness...

Being ill is not cheap!  Before I got sick I never realized how much is not covered by insurance.  As a nurse and/or the average healthy person, I thought that when you get sick, if you have insurance, you're pretty well covered.  I knew the bills still pile up because of copays, deductibles, and co-insurance.  However, I never realized that there are plenty of things that people need when they're sick that insurance just doesn't cover.  I know better now! 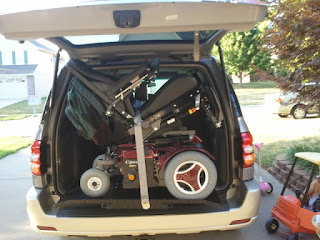 The biggest thing that isn't covered by insurance is medical equipment.  I did get an electric wheelchair that was covered by insurance.  However, I had to hold a huge fundraiser (my garage/bake sale in '11) to cover the cost of the co-insurance and deductible which put the cost of the chair at almost $3K.  In addition to that, insurance may pay for the majority of the cost of the wheelchair.  However, they don't pay for what you need to take the wheelchair anywhere - a chairlift for your vehicle.  Those cost about $2500.  Once again, that was paid for by the fundraiser and some generous donations.

Okay, so now I have a chair and a way to get it where I'm going.  However, my house is two stories.  So now we need a ramp or chair lift for our house.  We had a couple of people come over to see what our options are and give us estimates.  It turns out that because of the way our house is set up a ramp would not be realistic (it would take up our entire front yard) and a lift would run around $5K.  (These "K"s after prices are killing me!)  We did well at the fundraiser but not that well.  So that was out of the question.  And, guess what!  Insurance doesn't cover a dime of that either.  In the end we ended up buying a used wheelchair for upstairs (which is where I spend all of my time unless I'm leaving) and we keep my new w/c in my car for when I go places.

So far we've found ways around everything, right?  Wrong.  I now have a wheelchair upstairs and downstairs.  Then there's the problem with the stairs themselves.  I am able to walk up and down the stairs most of the time as long as I'm careful and take them very slow.  There are days, though, that I have been out at a doctors appointment or something that wears me out and I am unable to get up the stairs once I get home or I am able to get up the stairs but that last little bit of activity makes me more sick.  Put in a stair lift you say?  Oh, well, I'd like to, but a stair lift that costs over $1K used or $2k new is not covered by insurance either.

When I go somewhere I am lucky to have a wheelchair and a lift in my car for that wheelchair.  My wheelchair is kept in the back of my SUV.  That means that the back has to be opened before the lift can come out and closed after it's put back in.  All of that opening and closing is done manually, by me if I'm by myself.  One more thing that I am able to do for now but not very easily.  Once again, an electric/power liftgate is definitely not covered by insurance.  And that cost definitely requires one of those fancy "K"s behind it as well.

Those are just the big things.  The only "treatment" for Mitochondrial Disease is the "mito cocktail" which is a group of supplements that all mito patients are instructed to take.  Some people notice a difference as they're taking them.  Others (like myself) may not notice a difference on a day to day basis but are still supposed to take them because they may be life lengthening.  The coq10 is the primary supplement.  We cannot just take coq10 from walmart, cvs, or gnc.  If we (mito patients) want the most effective coq10, we have to get it online from a couple of suppliers.  And when taking 1200mg a day, it costs $200 a month.  That's only ONE supplement.  Luckily that's the most expensive one, but it all adds up.  AND that's only the supplements.  My prescriptions cost over $300 a month, and yes, that's with insurance.

Then there's the things that aren't necessary but very important, like eating healthy.  Why is it that eating healthy is so damn expensive but eating junk food is cheap?  That's why everyone in the US is overweight.  Well, that's part of it.  When you're low on money it's very difficult to buy healthy food.  There's also the subject of how easy and fast it is to eat non-healthy foods and that is half of it, but we're not discussing that topic right now.  One thing at a time.

I'm sure I can think of plenty more examples of ways more money would help me live a healthier, happier life, but I think you get the gist.  So, as you can see, finances have a HUGE impact on people with chronic illness.  Not only does chronic illness impact finances, but finances impact chronic illness.  I know I wouldn't be well if I had  more money.  However, I am pretty sure that my health would improve a noticeable amount if I was able to live the way I really wanted to live but can't because of a very limited income and growing debt.
Posted by Robin at 9:48 AM

I hope that you are doing well now, Robin. I understand where you are coming from. It is really hard to handle your finances, especially if you are dealing with an illness. It may seem tough but I think you can still devise a plan to manage your finances. One way is to keep track of your medical bills, spending and other medical-related expenses, so you can cut down on other unnecessary bills and put it on your medical expenditures.