I haven't posted a lot recently because all I can think about right now is my upcoming appointment (In case you couldn't already tell).  With that being the only thing I think about, and my posts are based on my thoughts, I didn't want to post repetitively about how impatient I am.  Okay, well, not more than twice.  Three times if you count this post because you have to know that I'm going to mention it.

I have been learning, very slowly at that, how to deal with my over abundance of time and complete lack of energy.  Now, that's not to say that I'm happy with the fact that I'm couch and/or bed bound most of the time.  This is not to say that I'm okay with the fact that I can't get up and do all of the things that I love to do.  I won't list them all again, as I'm pretty sure I've mentioned it before.  I am just beginning the transition into accepting the fact that I need to find new hobbies.  I need to find ways to keep me busy that require little to no energy, aside from facebook games.

I have been thinking of things that I would like to do.  I have not followed through on those ideas yet, though.  I think a small part of me is still holding out hope that I will get diagnosed with something next week than can be cured (although that's very doubtful) or something that has a more effective treatment than what I have now (which is just about nothing). 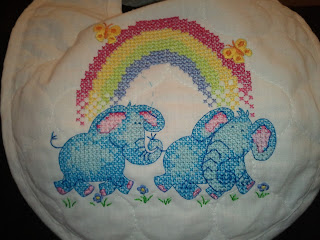 As I mentioned in a previous post, I have taken up cross stitching.  So far, I enjoy it.  It is something that I can do while lying down or sitting up.  I just completed my first project.  Well, half of it anyway.  I am creating bibs for a friend of mine who just had twins.  The first one is done and I have started on the second.  It is the only thing that has made me feel like I've accomplished something in the last year or more.  Granted, it's a very small accomplishment, but it's a start.  In case you're wondering, I'm pretty sure my friend won't see this.  She's a little busy with newborn twins and an 18 month old.

It has been so hard to go from an accomplished ER nurse, runner, wife, and mother to someone who can barely take care of herself.  I used to get compliments about anything from how good of a nurse I was to how awesome it is that I ran a half marathon.  Not only that, but I felt good about myself, without the acceptance of others.  Now, I feel so useless.  I don't get compliments or praise.  But there's a reason for that.  I don't ever do anything that deserves it.  I know that.  But the biggest problem is not that other people don't give me praise or boost my confidence.  It's that I don't feel like I deserve it.  I feel, as I said before, useless.

That is why I am trying to find projects to do that would make me feel good when I complete them.  I don't need compliments or praise from others.  I need it from within myself.  And I don't have that right now.

When I am done with the cross stitching gift for my friend, I would like to make Christmas stockings for my family and I.  I have found some good cross stitching kits for stockings online.  However, I want to get all 4 at once so I can get similar ones that would look good together.  I don't want to take the chance that I'll buy a couple of them and when I want to buy the others, they have discontinued the ones I wanted.  The stockings are about $20 a piece and we don't have an extra $80-100 to spend on anything other than necessities right now.  So, hopefully, disability will go through and I can buy those stockings to give me something to do. (Probably for the next year or two at that.  They look time consuming!)

I have also decided that it would be fun to learn another language.  I "studied" Spanish in high school.  Studied is in parentheses because that was a very light term back then.  With all of the Spanish speaking people in the U.S. now, I thought it might come in handy.  I can still catch on to a very little bit when I'm listening.  However, when it comes to speaking Spanish, I am at about the same level as my four year old who learns all of her's from watching Dora the Explorer.  So I'm thinking maybe Dora is not the best teacher for me.  Once again, when money allows, I'm going to buy a program that I can do from home in order to learn Spanish.

So, I have successfully gotten this far without talking about how awful waiting is.  As of right now, I have 7 days, 16 hours, 54 minutes, and 45 seconds until my appointment with Dr. Shoffner.  I'm not impatient at all.  (note the sarcasm font I used there.)  I am so sick of waiting.  Oh great, now I'm singing the tune from Finding Nemo in my head, but with waiting in place of swimming.  I'm going to have that in my head for the next 2 hours.

I have managed to write a post that is not completely about my impatience and waiting for my appt.  I think I better not press my luck and post again until after my appt.  I will post as soon as I have the energy after my trip.  We are flying to Atlanta and back in one day!  We will have to leave our house at about 5am and will not return until about 11:30pm.  It's going to take me a week to recover.  However, it will be WELL worth it if I get some answers while I'm down there.

Love the cross-stitch bib. Glad you have found something that works for you. I think we are often our worst critics. I would never judge others the way I judge myself. We all need a purpose or sense of worth and that can be really hard when your life is turned upside down. I found a picture from work the other day of me and my old rehab team. It was like being sucker punched to see the old me. Strange it can still do that after all this time (I left work in 2007). So I guess I'm still working on finding that purpose once again.

I really hope you get some answers at your appointment. I understand the impatience, I hate the waiting, the wondering all of it. I will be thinking of you. (hugs)

The "over abundance of time and complete lack of energy" is a challenge isn't it. As I focused a lot on physical activities, I never really developed hobbies aside from reading up on certain subjects. Some days now I really tire of passively gathering information through a book or screen. I want to do something and am trying a few things out.

Love the cross-stitch and I too have been thinking about working on Spanish. I'm exploring online to see what I can get from the library system first before spending any dollars.

I'm playing a bit with Zentangles. They're fun especially if you're not trying to plan ahead for a particular image. An MSer, Sherry, has started a site, Mangled Tangles where some of us are sharing our first attempts. May interest you, or not.

Fingers crossed for the Atlanta visit. I'm trying to live life and not think about Texas at the end of April. I'm rooting for you to come away from Dr. Shoffner's with answers!

Thank you for all of your support/comments. I so appreciate getting comments from others dealing with similar problems. Even if I don't respond in a timely manner. I do read them immediately.

Michelle - Thanks for the compliment on the bib. I am definitely my worst critic, as we all are. I can understand the sucker punch when seeing the old you. I have seen pictures of me from a year and a half ago from races I have run and it tears me up inside. Thanks for the hugs, it helped. ;-)

Donna - I looked up the zentangles. That's interesting. I've never seen or heard of that before. I don't know if that is so much my thing as I am not much of an artist. I am too type A for something like that I think.

Let me know what you find out about the spanish education programs and/or books. I was looking at Rosetta Stone on ebay and they are a whole hell of a lot cheaper.