What Mitochondrial Disease Means to Me, Part 3

Mr. Hankey, the Christmas Poo
Get More: SOUTH
PARKmore...
POOP!!!
Yep, today's post, boys and girls is about, yep you guessed it... poop!

Okay, well, not really.  Actually, today's post for Mitochondrial Disease Awareness week is more about the lack of poop, than poop itself.

Most people with Mitochondrial Disease have problems with their GI System; namely GI Dysmotility.  What the hell is that, you say?  Well, as I'm sure you guessed, I'm going to explain it.

GI dysmotility is where the GI system, from the stomach down to the large intestine/colon, does not move, or does not move at the normal rate.  This, as I'm sure you can imagine, causes many problems.  Let's start from the top and make our way down.  When the stomach doesn't move food through it, it causes multiple problems just from that standpoint alone.  Many mito patients have the same GI problems I do, but I will just discuss them in terms of how they affect me.  Any time I eat anything, I get full very quickly.  I am not able to eat much at a time now a days.  If I do eat too much, which is about half of what I used to be able to eat, I will get very nauseous.  Even if I don't eat so much that I get nauseous, I will still feel very bloated, uncomfortable, and fatigued for at least an hour after I eat a meal.  The act of eating a meal, and then digesting it, is a lot of work for my body.  It is a very fine line that I have to walk to eat enough food both with each meal and on a daily basis so that I have the nutrients I need, especially for energy, but yet not too much food so that I am nauseous and also exhausted from having to digest my food.  It's funny.  Food is supposed to give me energy, so if I don't eat enough, I don't have enough energy, but if I eat too much, I don't have energy.  Ha!

Let's move on to the small intestines and colon.  Neither of these move fast enough, if at all.  This, as you can imagine, causes extreme constipation.  A lot of you probably think of constipation as hard, difficult to pass stools.  However, it also involves going for multiple days without having a bowel movement.  I generally go about once a week, sometimes less than that.  As you can also imagine, this causes a lot of pain and bloating. I have abdominal pain a lot.  If the stool is not passing because the colon doesn't move, it will sit in the colon and/or small intestine and the longer it sits there, the harder it gets.  The harder it gets, the more difficult it is to pass.  In addition to that, if stool is not coming out, there's no room for additional food to come in.  Which then makes the problem in the last paragraph worse.  So, it becomes a vicious circle that gets worse and worse.

I do take medications for these problems.  Unfortunately, the medications I'm on right now don't do a whole lot.  The Prilosec I take for my heartburn doesn't work all that well because the heartburn is caused from my food not digesting, not because of too much stomach acid.  I also take Miralax.  It's a non-habit forming laxative that is okay to take on a daily basis for long periods of time.  However, all that does is soften the stool.  Miralax does not make the intestines move.  So, I still can't pass the stool that is now soft.  It does, however, help stop the vicious circle that I explained previously.

The last problem with my GI system is muscle tone.  The intestines are controlled by the autonomic nervous system.  My autonomic nervous system doesn't work due to my dysautonomia.  That is what causes my intestines to stop moving like they are supposed to (that movement, by the way, is called peristalsis).  That movement is not the only thing that is working when you have a bowel movement, poop, take a crap, drop the kids off at the pool, go number 2, take a shit, take a dump,  pinch a loaf, defect, sit on the throne, drop a deuce, or whatever you call it.  When you go number 2, you also use multiple muscles in your pelvis to help pass the stool.  Think of when you're bearing down, grunting, squeezing, pushing, use the valsalva maneuver or whatever you want to call it.  When you are doing that, you are contracting muscles in the abdomen.  Well, when you have a disease that causes muscle weakness, ALL muscles are weak, including the ones you might not normally think of.

So, this completes our talk on poop.  Thank you for joining me for this informative discussion about dropping the kids off at the pool.  If you have been offended in anyway... I don't really care.

Here is the mito video of the day...

This is Pam.  She lives in the Kansas City area, not too far from myself.  Fascinating story.  Fascinating woman.  We have yet to meet, but we have talked on the phone.

Since I'm a couple of days behind, I am hoping to post another mito awareness post later today.  We'll see how the day goes though.

I didn't post the last couple of days because on September 20th, I was celebrating another year of my life gone by.  It is more of a celebration to me now because I am thankful that I am able to celebrate another year of my life that I have lived.  I may not be living my life the way I had originally planned, or the way I would like to live it, but I am still living.  Sometimes I do forget that, I know.  It's not easy to celebrate a life that you did not wish for, but it's getting easier and easier as time goes on to appreciate my life the way it is.  It could be worse, my kids could be celebrating my birthday without me. 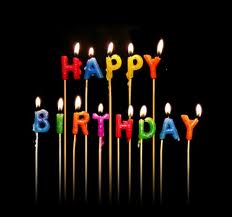 Today I will be celebrating another year of my wonderful husband's life gone by.  He's healthy as a horse.  Thank, god.  He is the most wonderful man I know.  I couldn't have found a better husband.  He's not perfect, but I know he tries... even if I do get on him every now and then about things I wish he would do different.  I do know that he is still better than any other man I could ever find.  So, on that note... Happy Birthday to the best husband and father in the world.  I love you, and I will still love you when we're celebrating your 78th birthday.
Posted by Robin at 11:02 AM